And really all of Trump’s supporters, but especially Mike Pence.

Would you stay on the the ticket if Trump had said he enjoyed consensual sex with men? Would you Mike? Be honest! We should ask folks like Franklin Graham and Jerry Fallwell, Jr. the same question. Because I think we know the answer. 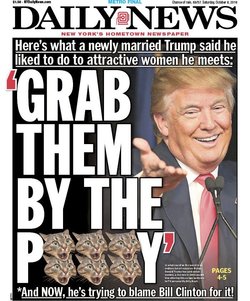 Now this is not the “How bad does it have to get” question. It is not, “Does he have to kill 6 million Jews, Mike?”

It is very simply, “Is consensual homosexual sex somehow worse than sexual assault?” Please explain how homosexuality is a special sin, Mike and Franklin and Jerry and the rest of you “Christians.” One sin where people who do it aren’t entitled to their civil rights. But people who are OK with sexual assault, adultery and maybe even rape are presidential material. What would Jesus say?

Let’s further imagine how many white guys would be at Trump’s next rally if the tape had caught him saying, “When I see a hot guy at a party, I get out the Tic-Tacs, cause I know we’ll be getting it on. I love the taste of semen in the morning.”

You know damn well that if he had been caught saying how much he loves gay sex, there would not no one at his next rally. You would certainly hear the crickets chirping. If that were case the Trump would resign simply because he would know he would get no votes. Instead of grabbing women by the pussy, he was revealed as they would say in their world, as a pussy himself.

“Christians” are fine voting for an adulterer, liar and even rapist. But a gay guy — no way!

And that is the modern Republican party. Sexual assault against women is OK. But gay sex, way beyond the pale.

And that is pure hypocrisy. Jesus himself preached against it. Republicans and their evangelical allies are living it.