Can there be any more doubt about who Donald Trump really is?

And no, I don’t just mean a possible serial sexual assaulter, although that is certainly part of the puzzle.

In Trump’s little mind: norms, values, laws and even the Constitution simply do not apply to him. As he sees it, he is not accountable to public opinion, the Supreme Court or even God himself. He is only accountable to the id of Donald Trump.

The pieces have always been there. And they have not been on secret hidden tapes either. The praise for Putin, the “strong leader.” Inciting violence at his rallies. Calling for journalists to be silenced. Claiming that only he can “fix everything” at the Republican convention. Saying that “only he” can fix the tax code. Continuing to condemn the exhonorated Central Park Five.

And, finally, last night, he pissed all over the Constitution not once, but three times.

Almost everyone caught the throwing Hillary in jail moment. But his “retrial” of Bill Clinton is also pissing on our Constitutional protections. Bill has been tried many times for the issues Trump brought up, both in court and on the floor of the Senate. Trump wants to revisit those, violating the spirit of double jeopardy which is enshrined in the Constitution.

Finally, Trump wants to demean the work of defense attorneys everywhere by denigrating Hillary’s defense of a criminal defendant. Effective representation for such defendants is also a basic right in Constitution, but Trump wants none of that.

On top of his strongman approach to government, for example asking Hillary why she didn’t close the tax loophole all by herself, we have someone running for President who thinks the Constitution is for losers. A roadblock for chumps, but doesn’t apply to him. 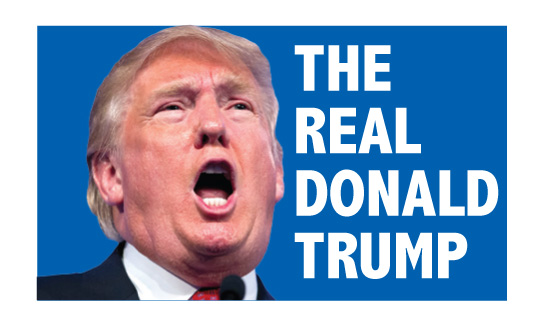 So where is the Republican outrage about this? Almost nowhere to be heard. A few tut-tuts about bad language on the #Trumptape. A few who seem to honestly feel that allowing a serial molester in the White House might be a bad idea — for their political careers. But not so much as a peep about what Trump clearly thinks about our Constitution and our Republic. Not much. HE will take all power and HE will “fix” everything.

Trump is a Constitutional crisis under a bad hair job. The enemies list and plumbers of Nixon would seem quaint in a Trump administration. He has pretty much said so himself.

Republicans could have taken a principled stand, but they didn’t. And they still haven’t.

Evangelical leaders have trashed their reputations by endorsing Trump. They showed their true colors. They don’t give a shit about values and the Bible. They only want to tell other women what to do with their uterus. Oh and maybe scream at some gay people.

In the same way Republicans have shown they don’t give a shit about the Constitution and the rule of law. As long as they can repeal Obamacare, Social Security and Medicare.

Il Duce Trump is going to “stop and frisk,” have a religious test, build a wall and jail his opponents? Paul Ryan don’t care. Neither does Mitch McConnell.

Trump said he was going to trash the Constitution in these and many other ways early and often. Said it again last night in the debate. Republicans have said NOTHING.

Because they don’t give a flying fuck about the Constitution.