One step forward, two steps back.

That’s a way to describe two recent policy revisions the Democratic National Committee (DNC) instituted as the party formulates a platform for the 2020 presidential election.

“[The] social license of big oil is being steadily revoked. This is what winning looks like, folks.”

“Fossil fuel corporations are drowning our democracy in a tidal wave of dark oily money; they have deceived the public about the impacts of climate change, fought the growth of clean renewable energy, and corrupted our political system.”

Then last week, the DNC sanctioned its superdelegates, stripping the 716 officeholders, state and local party officials, and entrenched Democrats of the honor of casting first-round ballots toward the 2,383 votes needed to nominate the next Democratic presidential candidate at the 2020 Democratic National Convention.

This is seen as an olive branch to the more progressive wing of the party that supported Vt. Sen. Bernie Sanders over Hillary Clinton for the party’s presidential nomination in 2016.

“We think it’s so important that we return power to the grassroots.”

Larry Cohen, board chair of Our Revolution, the national grassroots organization Sen. Sanders formed after losing the Democratic nomination, stated in the email:

“[It’s] a victory for the political revolution and the people of this country. The sweeping reforms made at this week’s DNC meeting in Chicago also include incentives for same-day registration and party change. That means the millions of people who are prevented every year from participating in Democratic primaries and caucuses will now have their voices heard.”

Two months after the unanimous ban on fossil fuel corporation donations, the DNC voted 30 to 2 to reverse it.

In a series of tweets, climate reporter and contributing writer for The Intercept, Kate Aronoff, argued that although Tom  Perez’s resolution purports to strengthen union support, it in fact encourages fossil fuel executives to continue buying Democratic lawmakers’ and candidates’ influence.

People for Bernie tweeted about four words in the resolution at the heart of the corporate capitulation:

“There are 435 words in @TomPerez‘ resolution. 431 are fine. 4 change the policy of the party and go against the will of @TheDemocrats‘ base.” 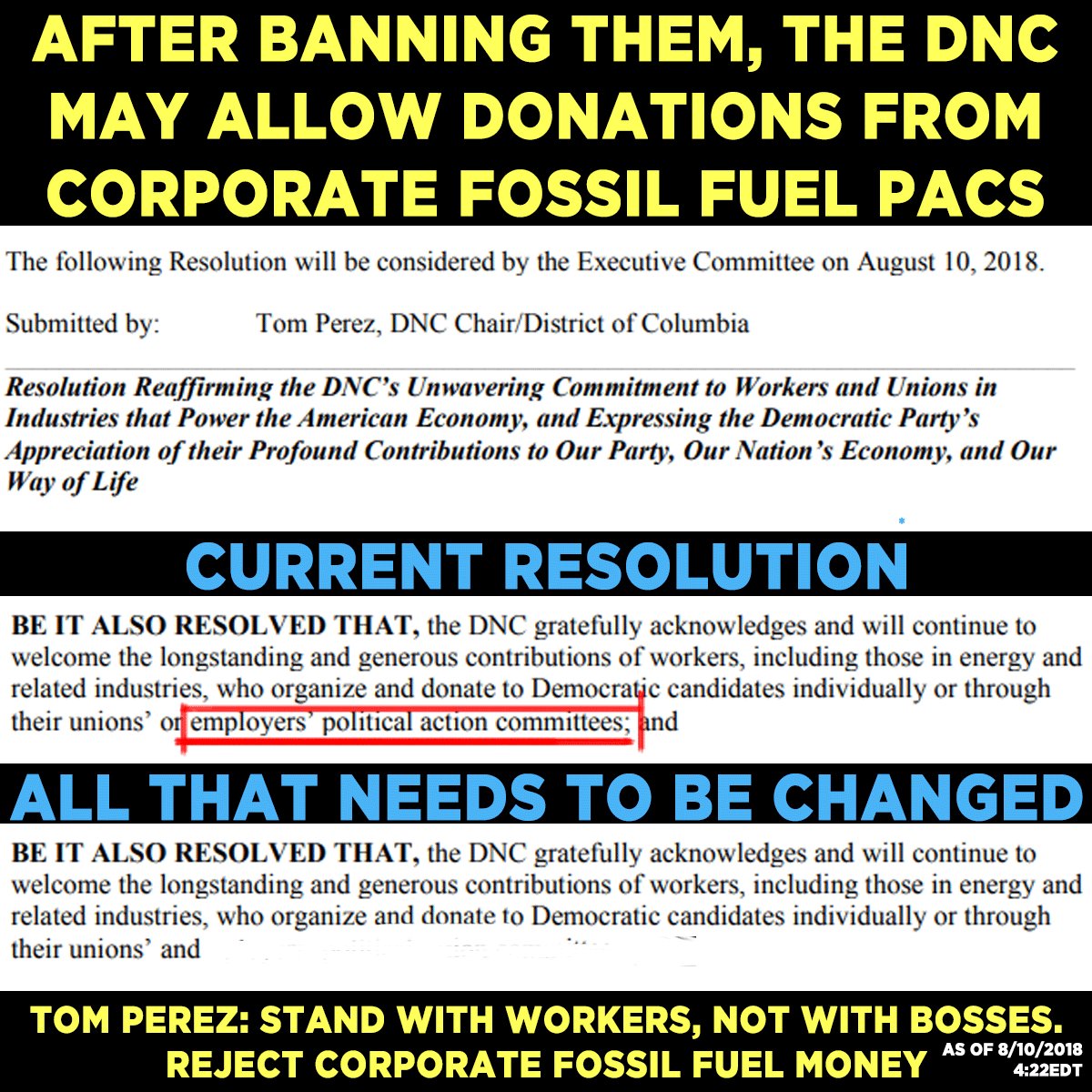 “To be clear —> @DNC staff and officers NEVER consulted me on language to reverse my resolution banning corporate fossil fuel PAC money and now said they have to keep the resolution as is because of all the work *we* did. 4 Yes votes; 28 No votes so my motion to ban PAC $ fails.”

Credo Action along with myriad other organizations has published an online petition that has already received 56,889 signatures toward a 75,000 goal.

If this is an issue for you, let the DNC know by signing.

If a Democrat represents you in Congress, perhaps call his or her office and express your disappointment as well.