The United States, since the end of World War II, has been considered a world leader, and for a long time has had, for the most part, the respect of other nations around the world. Since U.S. intervention in Iraq and, to a lesser extent Afghanistan under George W. Bush, the respect of the global community for the U.S. has been waning.

In the past year, the rise of Donald Trump to GOP presumptive nominee has done nothing but to further tarnish that image. Similar to the reactions of many here in the U.S., the rest of the world first saw Trump as a clown, a joke, and thought we were too smart to fall for this particular joke. Then, as the snowball began rolling ever faster down that slippery slope, other nations began to express concern and doubt. But still, they thought, Americans are too smart … they are just having a moment from which they will wake up soon. Today, the general reaction from other nations ranges from mild disdain, to outright contempt, to fear that this madman may be the catalyst that brings doom to, not just the United States, but the world. 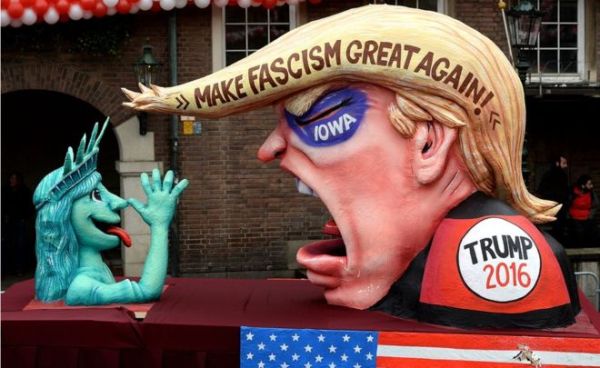 While WWII and America’s role gave rise to the U.S. being seen as a ‘superpower’, President George W. Bush’s wars in Iraq and Afghanistan began to change that perception. Donald Trump may well be poised to finish what Bush started in stripping the U.S. of the respect of our allies. Trump’s first ‘foreign policy speech’, alarmed our allies far more than our enemies. His ‘America First’ rhetoric is often seen on the other side of the globe as a threat to retreat from the rest of the world, or to back out of commitments we have to our allies.

Germany’s Foreign Minister, Frank-Walter Steinmeier, said, “The world’s security architecture has changed and it is no longer based on two pillars alone. It cannot be conducted unilaterally. No American president can get round this change in the international security architecture…. ‘America first’ is actually no answer to that.”

Carl Bildt, a former Swedish prime minister and U.N. foreign minister said he heard Trump’s speech as “abandoning both democratic allies and democratic values. Trump had not a word against Russian aggression in Ukraine, but plenty against past U.S. support for democracy in Egypt.”

In some circles, Trump has been dubbed “America’s First Isolationist Candidate”. Prior to WWII, a large portion of the U.S. population was isolationist, preferring to stay out of the struggle in Europe to stop the madman, Hitler. In fact, had Japan not bombed Pearl Harbor in 1941, it is doubtful that FDR would have been able to drum up support to enter the war in any official capacity. ‘America First’ was also the phrase used by those who called for the U.S. to stay out of WWII, rather than to support its allies.

If there is a lesson to be learned from WWII, it is that the world is now a much more global community and no nation can stand alone; isolationism leaves a nation vulnerable. Former South Korean Vice Foreign Minister Kim Sung-han noted, “Saying the U.S. will no longer engage in anything that is a burden in terms of its relationships with allies, it would be almost like abandoning those alliances. It will inevitably give rise to anti-American sentiment worldwide.”

So, what does the rest of the world think of Donald Trump?
Germany’s Der Spiegel has called Trump the most dangerous man in the world. Britain’s David Cameron says his plan to ban Muslims is divisive and unhelpful. The French liberal newspaper Liberation has described him as a nightmare turned reality. JK Rowling tweeted that he’s worse than Voldemort. A recent Economist cover has a picture of Trump dressed as Uncle Sam with just one word, “Really?” That pretty much sums up the mood of global elites. A few comments I think are noteworthy:

“Oh, I think it does matter what the world thinks of US candidates and presidents and it matters even more how the world views Americans at large. Can we be a trend-setting nation and global leader when a third of nation falls for a histrionic foul-mouthed populist with fascist tendencies? The US has many friends around the world but many often wonder about our lack of common sense.” — Bob Williams, BBC, 05 Mar 2016

“Speaking from a Canadian view, people that I know and that I speak with about this think that Trump is one or any combination of the following: dangerous, scary, moronic, rude, racist, inciter of hate, bigoted, misogynist, unfit for politics, narcissist, sketchy, womanizer, angry, hateful, etc etc etc” — Catherine Durnford-Wang, Quora, 16 Mar 2016

“The inability of politicians to connect with voters and get things done was part of what made authoritarianism so appealing in the interwar years.” — Heather Horn, The Atlantic, 03 March 2016

Hundreds of thousands of Britons signed a petition calling for Trump to be banned from Britain for hate speech, which was taken up in Parliament. Cameron declined to ban Trump, but said: “If he came to visit our country, I think he would unite us against him.” The UK is arguably our #1 ally. A Trump presidency “would be a disaster for EU-U.S. ties,” said one senior EU official involved in shaping foreign policy in Brussels, headquarters of the EU. “Right now, we and the Obama administration generally understand each other. I don’t think we understand Donald Trump. He has no understanding of the delicate, complex nature of foreign policy on Europe’s doorstep.”

While the UK may be considered our #1 ally, Canada is #2, and has the added distinction of being one of only two countries that actually share a border with the U.S. So what does Justin Trudeau, Prime Minister of Canada think of Trump? For the most part Trudeau, ever the diplomat, has responded to questions about Trump simply by saying that he has faith in the American people. However, on at least one occasion he made a stronger statement when asked his opinion of Trump’s hateful rhetoric:

I don’t think it comes as a surprise to anyone that I stand firmly against the politics of division, the politics of fear, the politics of intolerance or hateful rhetoric. I think Canada—indeed, any modern society—does best when we understand that diversity is a source of strength, not a source of weakness, that the elements on which we are similar are always far greater than the elements on which we are diverse, and if we allow politicians to succeed by scaring people, we don’t actually end up any safer.

And of course we already know how Trump is viewed by the leaders and citizens of the other nation that shares a border with us!

So, why should we care what the rest of the world thinks?
When President Obama traveled to the United Kingdom and encouraged the UK not to leave the European Union (EU), a large portion of Britons were up in arms, basically saying the U.S. should stay out of their politics, their decisions. I do not necessarily agree, nor do I agree with the naysayers here in the U.S. who believe it does not matter what the rest of the world thinks of a candidate who could potentially become the next U.S. president.

We need our allies and our allies need us. A president who does and says everything in his power to alienate those allies is not an asset, but a liability. Global issues, such as the ongoing fight against terrorism, the fight to protect the world from the tyranny of such rulers as Kim Jong-un, Vladimir Putin, and Recep Tayyip Erdo?an, and the deteriorating environment are all extremely important issues on the world stage today and for the foreseeable future. Our allies have a right to expect that the leader of the nation they look to for global leadership at least understands those issues and is likely to make decisions that will benefit not only the U.S., but also its allies.

Donald Trump has already, in essence, declared himself ‘persona non grata’ throughout the Middle East. Latin America and Mexico certainly have no reason to love him. Europe is leery and frightened of the effect his presidency would have on global peace. In fact, the only leaders who have shown any degree of support for him are the three I named as tyrants above: Jong-un, Putin and Erdo?an! To me, this speaks volumes. Think about it.